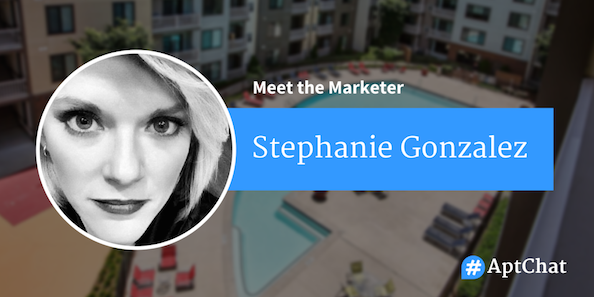 This is the fourth in an ongoing series. Our goal is to accelerate your learning curve by connecting you to some of the brightest minds and best marketers in the apartment industry. Is there someone you think we should feature in a coming post? Let us know!

Stephanie Gonzalez began her career in the multifamily industry while she was a student at the University of North Texas.

Now, more than 15 years (and a variety of leadership roles) later, she’s the Director of Marketing and Customer Experience at Venterra Realty, headquartered in Richmond Hill, Ontario. (Stephanie is based in Dallas.)

What she likes most about her role is simple: innovation. It’s something she’s passionate about.

In fact, a forward-thinking mindset is what led to her proudest marketing accomplishment to date.

In 2006, she convinced Venterra’s C-suite and senior teams that they should embrace ApartmentRatings.com and start responding to reviews.

“I had no idea at the time that online reviews would turn into the marketing role they play today, she says. “It was more of a hunch that there is some truth to every complaint and we should get involved.”

The company has applied that thinking to everything it has done since. In 2014, every property in Venterra’s portfolio received ApartmentRatings.com’s exclusive Top Rated Award.

To learn what she thinks the apartment industry could do better and where she looks for marketing inspiration, keep reading.

What’s one thing the apartment industry as a whole could do better as far as marketing and advertising is concerned?

Watch an example of what she has in mind:

Who do you think is doing the most innovative apartment marketing right now?

I feel like there are many of us that are doing one or two really cool and innovative things: Urbane, 30 Lines, LeaseLabs.

Who is doing innovative marketing outside the industry? Where do you look for inspiration?

You can order anything at the bar. What are you drinking?

Grey Goose and water or a Tom Ford.

Keep up with Stephanie and her team at Venterra by following her on Twitter.

How to Market During the Slow Season